This section describes the various means of near real-time dissemination of satellite data and products as well as their distribution by other means such as the Internet and retrieval from archives.

Note: The information below is generic. For detailed information on access to Level 0/Level 1 data from specific satellites, please see the CGMS Satellite status page

Direct broadcast of data from both geostationary and polar orbiting satellites provides suitably equipped users with real-time access independent of any telecommunications infrastructure except the data receiving station. 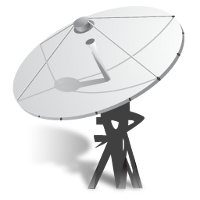 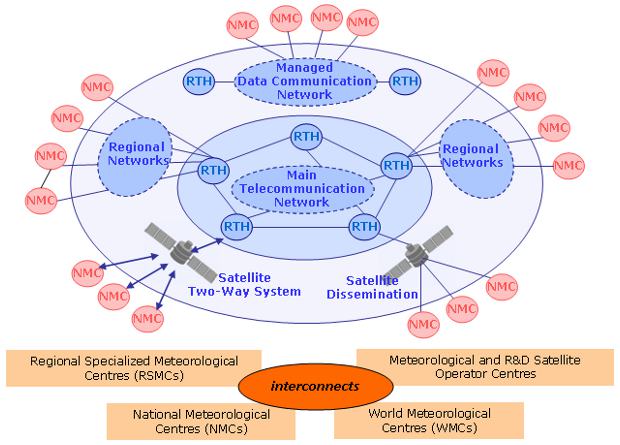 Many satellite products, especially those processed to level 2 or above are distributed to WMO member states via the GTS. Typically they are injected onto the GTS via links to regional GTS hubs and transmitted in one of the approved WMO binary data exchange formats such as BUFR and GRIB (more information on these formats is contained in the formats and standards section).

In recent years emphasis has been placed on the use of commercially available telecommunications satellites for the purpose of distributing meteorological satellite data and products. Data distribution can be optimized from a pure telecommunications point of view and evolve with time in order to meet new requirements and benefit from the most cost-efficient technology. Additionally, when the meteorological platform does not have to support dissemination functions, the position keeping requirements can be relaxed, which facilitates extended lifetime operations. The most widespread approach involves file transmission with Internet Protocol (IP) by Digital Video Broadcast by Satellite (DVB-S) as available from various telecommunications operators around the world. This allows data rates of tens of Mbps to be received with standard low-cost equipment. Dissemination is performed in Ku-Band or in C-band. C-band offers more robust signal strength in intertropical regions because of its lower attenuation by water vapour and liquid water. It is however more sensitive to local interference with radars.

These services can offer unified access to various sources of data including different satellites, geostationary, LEO or R&D, as well as multi-satellite composite products, high-level products and non-satellite information. Satellite data dissemination via such systems is not specific to the satellite world and is a component of the WMO Information System (WIS).

The most developed system of this type is the EUMETCast service, EUMETSAT's Broadcast System for Environmental Data. Further details about EUMETCast are available on the EUMETSAT web site. Using EUMETCast as a backbone, a global dissemination system is being established through the Integrated Global Data Dissemination System (IGDDS) project. Information on the technical status of all IGDDS components is available here.

The IGDDS concept is also being extended to other application areas, beyond meteorology, which is the subject of the GEONETCast project described below.

GEONETCast is a near real-time, global network of satellite-based data dissemination systems designed to distribute space-based, airborne and in situ data, metadata and products to diverse communities. GEONETCast is a Task component in the GEO Work Plan and led by EUMETSAT, the United States, and China.

Satellite data are widely available on the Internet, both for public consumption and also as a means to disseminate data to a limited set of users. Satellite data and derived products are transferred using both http and ftp Internet protocols by satellite operators and data processing centres using both 'push' and 'pull' methods. The nature of the Internet combined with the typical data volumes is such that this method is usually not appropriate for critical near-real-time data sets but, with ever increasing bandwidth and improving performance and resilience, there is a trend towards increased use of Internet as a means to disseminate satellite data.

Meteorological satellite data and products are archived in multiple specialised centres worldwide. Data discovery is provided through a number of operator-based and product-based access points.