The Direct Broadcast Network (DBNet) is a set of operational arrangements for the real-time acquisition of Low Earth Orbit (LEO) satellite data through a worldwide network of local, Direct Broadcast receiving stations and the rapid delivery of these data to the global user community after pre-processing and formatting in accordance with agreed standards.

Sounder data from LEO satellites (in particular from the ATOVS suite of instruments) are among the most important sources of observation used by Numerical Weather Prediction (NWP) models. A brief description of the benefits they bring can be found in ATOVS-impact-on-assimilation-JMA-2007. Like all NWP model inputs, their assimilation is constrained by their time of availability. While locally received data (via Direct Readout reception systems) can be available in a timely fashion for the NWP models, the availability of global data is delayed by the storage time on-board the spacecraft and the procedures involved for the data collection, processing and distribution. The DBNET concept enables the delivery of LEO data, in particular sounder data, collected from a regional network of HRPT stations within the timeliness constraints imposed by NWP models.

However, not all WMO regions are well-served by HRPT data collection networks and so the main objective of DBNet is to facilitate the introduction of such regional networks, together with appropriate regional dissemination mechanisms, and inter-regional data exchange facilities, across the globe.

DBNet has its roots in the EUMETSAT ATOVS Re-transmission Service (EARS). EARS was initially established in 2002 in response to the requirements of Limited Area NWP modelling over Europe (HIRLAM then ALADIN) whose modelling area exceeded the coverage of a single HRPT station, and whose timeliness constraints were not compatible with the current scheme of global data collection. By merging the data sets from several HRPT stations EARS enabled the extended coverage and short timeliness requirements of the NWP operators to be met.

In recognition of the very positive impact that EARS data made to NWP model performance, the Co-ordination Group for Meteorological Satellites (CGMS), at its thirty-second session in May 2004, asked whether the system could be expanded into other Northern Hemisphere regions, and then extended to cover the Southern Hemisphere.

After the launch of the Suomi-NPP and FY-3 satellites with new suites of instruments, it was recognized that the scope of the RARS project needed to be extended and in 2015 the RARS partners agreed to rebranding the initiative as the “Direct Broadcast Network for Near Real-Time Relay of Low Earth Orbit Satellite Data" (DBNet)

An important consideration in the establishment of regional collection networks is the capability to deliver homogeneous sets of data from different sources to NWP Centres so that they can merge them with confidence. Hence DBNet also places considerable emphasis on the standards that DBNet Operators should adhere to, in order to guarantee the global consistency of the various DBNet data sets.

It is a widely quoted fact that observations from satellites impact the performance of NWP models to an extent that exceeds the sum of all other observation types. Of the various types of satellite observations that are available it is the data that describe the temperature and humidity of the atmospheric column beneath the satellite, including those data from the well-established ATOVS instrument suite, that result in the greatest benefit. The advent of sophisticated so-called variational data analysis methods in recent years has enabled the full significance of these vast data sets to be realised. They play a particularly important role by virtue of their global coverage and consequently NWP model performance over otherwise data sparse areas (such as oceans) is markedly improved.

Typically, NWP operators run their numerical models over a range of different domains, with the different variants having different spatial resolutions. For example, an NWP centre in Europe may run the forecast model for an area covering their local (national) region at the highest resolution, a version covering a continental domain at a slightly coarser resolution and also a version covering the whole globe at a somewhat lower resolution. The choice of resolution is governed by several factors including the ability of the model to represent the complex atmospheric processes at the chosen resolution, the availability of observational data at the model resolution and the available computer power. Generally, the higher resolution and smaller domain versions of the models are run with a deadline time for input observations much shorter than that for the global model. These arguments feed into the motivation and background for the DBNet initiative. 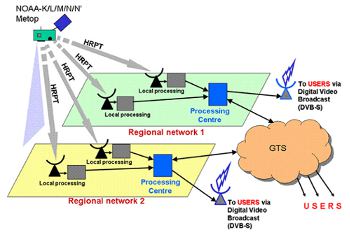 Compared with the normal means of access to global data, this approach allows access by users to a regional sub-set of data without the delay associated with on-board data storage prior to a full orbit data dump to a Command and Data Acquisition station.

The status of implementation of the main DBNet services is shown in the following diagrams:

A list of the current and planned participating HRPT stations is available (See the DBNet Network Status and Plans below), with their geographical coordinates and BUFR identifiers. The planned expansions will contribute to filling the geographic gaps visible on the graphics.

Data quality flags and other indicators are generated when the data are processed by the AAPP software. Embedded in the format of the retransmitted data, they alert to any inherent quality problems that might be present in the data themselves.

Service-related information is also gathered and published by the respective DBNet Regional Processing Centres. They monitor the completeness of the data that they receive from direct readout stations by comparison with the data expected from the nominal regional configuration. Additional factors are monitored by regional centres such as end-to-end timeliness indicators, or consistency of the navigation.

Monitoring by the NWP SAF

The NWP SAF lead institute, the UK Met Office, is responsible for routinely and automatically performing comparisons of DBnet data sets and the equivalent data in the global data sets received via another means. In this way the DBNet data sets are examined for consistency with equivalent data that has not passed through the DBNet processing chain. Such consistency is vital to enable the DBNet data to be used alongside global data, for example, in NWP applications.

The NWP SAF publishes the results of the consistency checks on the NWP SAF web site and has the capability to generate alerts and send them via email to the appropriate centre. Data locally received in Exeter, UK are also compared with corresponding DBNet data.

Identifying the data of interest

The first step is to know what area you would like data from. The areas for which DBNet data are available, and the corresponding centre(s), are graphically illustrated in the status graphics above.

If data is available from the considered area, the next step is to identify the particular reception stations from which data is required. The coordinates of each station and their associated processing centre are indicated in the DBNet Network Status and Plans (See below).

The normal mechanism for receiving data is via the Global Telecommunications System (GTS). In some cases other mechanisms are available such as DVB-S broadcasts, or FTP over the Internet.

To receive data via the GTS

To receive data via the GTS, users should contact their National Meteorological or Hydrological Service (NHMS) indicating the nature of the data that is required. The detailed identifyers and data descriptors for each reception station are given in the DBNet Coding Summary (See below).

To receive data via other mechanisms

To receive data via other mechanisms (if supported) users should contact the RARS Centre associated with the particular reception station (See the DBNet Network Status and Plans). The contact details for each RARS Centre are given below. The contact point will then inform the user about the relevant procedures to be followed for obtaining access to the data.

Links to Websites of DBNet Operators

(for operational information concerning the provision of the DBNet services)