This section describes the current global planning for operational geostationary satellites and Low-Earth Orbit satellites, as developed in consultation among WMO and satellite operators within the Coordination Group for Meteorological Satellites (CGMS). It includes a nominal configuration and a global contingency plan. 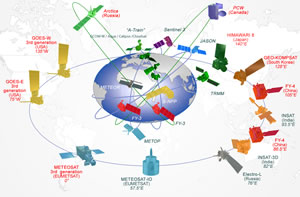 Schematic overview of the space-based GOS
(click to enlarge)

Observation requirements and related observing capabilities are kept under review as part of the Rolling Review of Requirements (RRR) process and a Gap Analysis of the space-based GOS is regularly performed. Gap analyses are maintained in the on-line database tool OSCAR (Observing System Capabilities Analysis and Review)

WMO has developed the "Vision for the WMO Integrated Global Observing System in 2040" that provides a long-term goal to foster the development of the WIGOS and meet the challenges of Earth system observation. The vision (addressing both surface- and space-based observation) was adopted by the 18th World Meteorological Congress, held in June 2019 (Resolution 38(Cg-18)).

The nominal constellation of operational geostationary satellites includes 6 spacecraft to ensure full coverage from 50°S to 50°N with a zenith angle lower than 70°.

Note that different locations may be used, depending on operational constraints and spacecraft availability.

The following interactive map shows the nominal footprints of these satellites (Assuming a zenith angle of 75°) : Show / Hide all footprints

While space-based observation increasingly involves Low-Earth Orbit satellites (either from operational or from R&D environmental missions) that provide essential input to numerical modelling, the constellation of operational meteorological geostationary satellites remains the backbone of permanent and near-global monitoring of the weather situation. Infrared composite imagery as shown above is produced on an operational basis with data from GOES-West and GOES-East (NOAA, USA), Meteosat and Meteosat/IODC (EUMETSAT) and MTSAT (JMA, Japan). Additional satellites like the FY-2 series (CMA, China) contribute to strengthen the system and ensure its operational continuity.

The current baseline for the core constellation is described in Chapter 4 of the WMO Manual on the GOS and in Section 5.4 of the CGMS Global Contingency Plan mentioned below.

New baseline in the Vision for the GOS in 2025

The new baseline for the core LEO constellation is to be deployed over three orbital planes around 13:30, 17:30 and 21:30 Equatorial Crossing Time (ECT) in Local Solar Time (LST). This should ensure regular sampling of the atmosphere avoiding too large a temporal gap around dawn and dusk, in order to satisfy as far as possible the observing cycle requirements from NWP and climate monitoring as concerns atmospheric temperature and humidity profiles. In addition, in-orbit redundancy should be available around these orbital planes, to the extent possible. 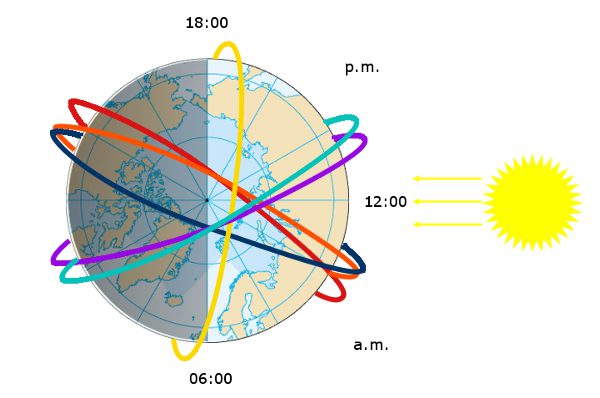 The CGMS members have agreed a Global Contingency Plan among satellite operators and they keep this plan under regular review.

Continuity of the geostationary imaging service is essential for meteorological operations in support of severe weather warning, and Numerical Prediction in general. Such continuity is ensured through maintaining additional satellites in stand-by position for in-orbit back-up, and through bilateral contingency agreements among neighbouring geostationary satellite operators. Through such agreements, operators agree that, in case of major satellite failure encountered by an operator, and if another operator has a spare satellite available, the spare satellite could be relocated to replace the failing satellite on a temporary basis until a nominal configuration can be recovered through the launch of a new satellite.

Continuity of low-Earth orbit services is achieved through redundancy on the am and pm orbital missions.

New Vision for the GOS (Summary of the space-based component)

Download the description of the WMO "Vision for the GOS in 2025".

A short summary of the space-based component only is given below.

For the space-based GOS, the new vision calls upon enhancements and additions in comparison with the current baseline. It includes, as operational components:

In addition, the Vision calls upon Operational pathfinders and technology demonstrators e.g.:

For a more detailed description of orbit types, see: http://earthobservatory.nasa.gov/Features/OrbitsCatalog/page2.php