Normally, forecasts of icing are for airframe icing only.

There are three strategies to cope with aircraft icing: (i) aircraft must be certified for icing, (ii) aircraft have to be cleaned of ice prior to take-­off (clean wing principle), (iii) aircraft are equipped with de-­icing equipment. Each aircraft is certified up to a certain category of icing severity: light, moderate, severe.

Airframe icing normally occurs when the ambient air temperature is below 0° C and supercooled water droplets are present. However, icing may occur even when the outside air temperature is well above 0°C: when an aircraft descends quickly from a high altitude, the aircraft skin, especially close to the tanks, may still be below freezing point (known as ‘cold soak’).

There are several types of airframe icing: 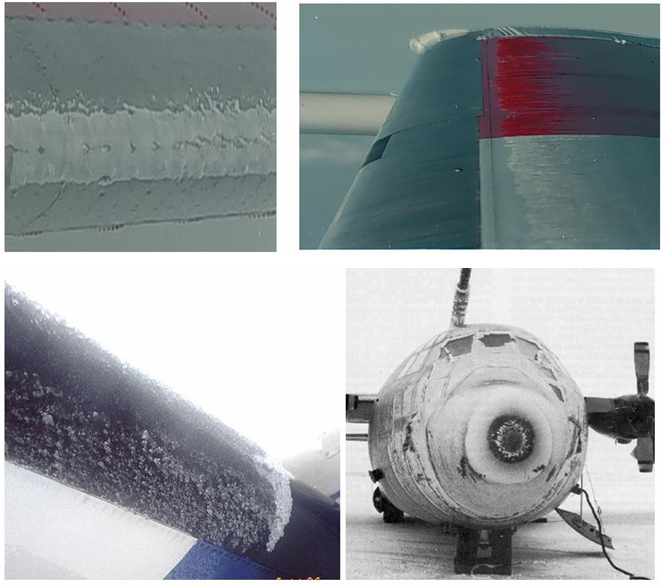 Small supercooled cloud droplets freeze rapidly on contact with the aircraft, trapping in the ice to give a deposit of white rime on forward-­facing surfaces. Larger droplets take longer to freeze, spreading out across the airframe before solidifying.

The intensity of icing is defined as follows:

Helicopters are particularly vulnerable to icing, since build­-up of ice on the rotors can lead to imbalance, de­stabilising the aircraft. 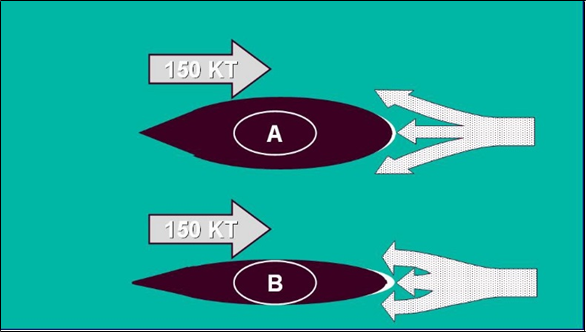 Airframe icing is a serious aviation hazard. The possible range of effects on an aircraft are listed below:

Engine or piston icing occurs under conditions of high relative humidity close to freezing when the under pressure in a piston causes the humidity to condense and freeze within the engine.

Some aircraft are prone to icing in the carburettor and air intakes. This is caused by a reduction in pressure leading to adiabatic cooling as the air expands.

Carburettor icing is by far the most common form of ice­-related problem affecting piston­-engined aircraft. When humid air enters the venturi in the carburettor, ice crystals are deposited. This constricts the venturi and causes progressive power reduction. Carburettor icing frequently occurs when the ambient air temperature is above 0° C, the dominant factor being the moisture content of the air. The more humid the air, the higher the risk; hence engine icing is more likely on a warm, humid, cloudy summer’s day than on a cold, dry, clear winter’s day. In very moist air, adiabatic cooling can result in a temperature reduction of up to 5° C.

The cooling may be enhanced in the carburettor by the evaporation of fuel. This refrigeration cooling can in itself lead to a temperature reduction of around 10° C.

An additional problem for the engine is the build­up of ice on the rims and struts of intakes. In extreme cases, large pieces of ice can break off and cause damage to the engine.

Some aircraft may require forecasts of the heights of specified temperatures (e.g. the PS 03 and MS 01 levels) to avoid flying at heights where engine icing may be a problem.

Engine icing is most common when the air temperature is a few degrees above 0° C and the relative humidity is greater than 60%. Pilots, therefore, use forecast temperature data and an estimate of humidity to assess the engine icing risk. Typical high humidity scenarios are mist after heavy rain, and just below stratiform cloud.