Tropical cyclones are the most destructive larger scale storms in the world. The generic term "tropical cyclone" (TC) is used to describe these non-frontal synoptic-scale storms originating over tropical oceans.

WMO has developed a classification according to the wind speed:

Note. ― In the case of aeronautical meteorological service provision, advisory information on tropical cyclones must be issued when the maximum of the 10-minute mean surface wind speed is expected to reach or exceed 17 m/s (34 kt) during the period covered by the advisory.

There are necessary environmental conditions for a TC to develop:

These conditions are met in synoptic environments such as the Near Equatorial troughs (NETs) or the Monsoon troughs.

Mature tropical cyclones vary considerably in size. 500 km is a typical diameter but the area of high winds is usually no more than about 150 to 250 km across. At the centre of the storm is the "eye", a roughly circular area, typically 20 to 50 km in diameter.

Tropical cyclones often have erratic paths. Maps showing the tracks of cyclones over a period of years may seem chaotic at first glance, but, on closer inspection, features common to many cyclones emerge. For example, in the early stages of their lives they often move towards the west as though embedded in a general easterly flow in the tropics. This early movement may be slow or may be rapid depending on the environmental conditions. Later, as they drift further away from the equator, they may tend to "recurve" and move towards the north-east (northern hemisphere) or south-east (southern hemisphere) until they are swept up into the westerlies of the middle latitudes. Cyclones moving out of the tropics usually decay or acquire the characteristics of extratropical cyclones.

Awareness of hurricane/typhoon/tropical cyclone track climatology is important for aviation operators. Operators must become aware of the seasons and regions when and where such storms can be expected. These storms are frequent over the North Atlantic and eastern North Pacific Oceans during the months June through November. Occasionally one can also encounter early or late season storms. The western Pacific Ocean has a striking feature: typhoons can form throughout a year, although most of the typhoons occur during the months between July and November. Westward-propagating disturbances from the western tropical Pacific Ocean amplify along the tropical belt. On the Indian Ocean side over the Bay of Bengal and the Arabian Sea, these storms are only seen during pre- and post-monsoon months, i.e. April and May (pre), October and November (post). Exceptions can however occur during months adjacent to the above.

Over the southern hemisphere, the genesis occurs from November to April. Occasionally one can also encounter early or late season storms. Such storms very rarely occur over the southern Atlantic Ocean. This is primarily due to the large climatological tropospheric vertical wind shear (westerlies increasing with height present) which is too great to sustain storms.

Aircraft in flight should avoid tropical cyclones and aircraft at airports in threatened areas should be secured or evacuated to another location away from the path of the storm. The main risks arise from destructive surface winds, which exceed 64 kt in a severe cyclone (hurricane, typhoon) and can reach 160 kt or more, and from the heavy rain that can exceed 500 mm in a 24 hour period. In coastal areas, storm surge poses an additional hazard. The storm surge is produced by the combined effects of sudden reductions in atmospheric pressure and strong winds of the cyclone piling up sea water, which causes severe flooding when it strikes the coast. The height of the surge depends on several factors including tides, currents, the shape of the seabed and the coastline, and the angle and speed at which the surge approaches the shore. Typically, the raised dome of water is about 60 to 80 km across and 2 to 5 metres (6 to 15 ft) above normal tide level.

Pilots should know of the position and possible short-range tracks of tropical cyclones along their flight plans. A corridor of tropical cyclone surface wind speed in excess of 80 kt is generally to be avoided. Most commercial aircraft fly at upper levels between 29 000 to 41 000 ft above sea level.  Even at these upper levels there can be severe turbulence in the heavy convective portions of the eye wall and the inner rain bands. 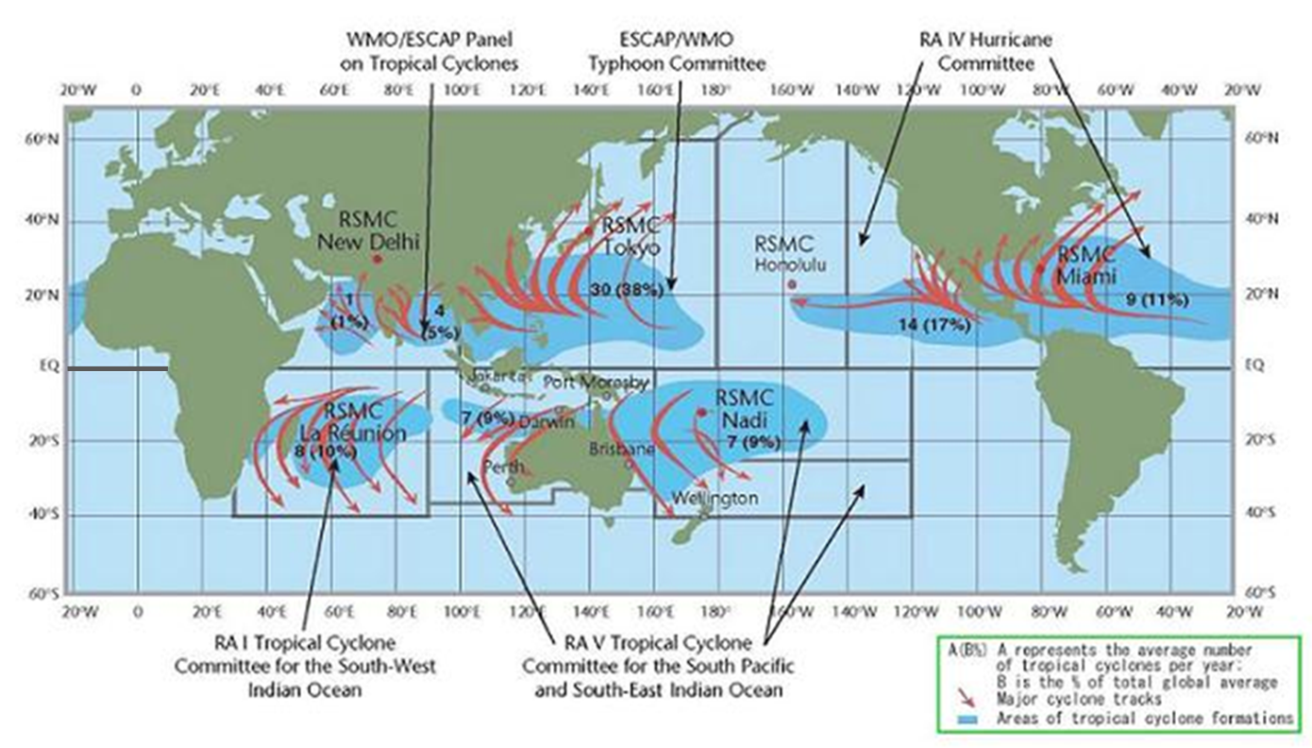 Some of the WMO RSMC/TCWC are also Tropical Cyclone Advisory Centres (TCACs) designated by the ICAO to supply aviation users and other with tropical cyclone advisory information. In total, ICAO has designated seven TCACs as follows:

On the public internet numerous websites provide access to real-time or near-real-time satellite imagery over the tropics. Here is a selection: