The Group of Experts on Scientific Aspects of Marine Environmental Protection (GESAMP) is an advisory body, established in 1969, that advises the United Nations (UN) system on the scientific aspects of marine environmental protection. At present it is jointly sponsored by eight UN organizations. GESAMP functions are to conduct and support marine environmental assessments, to undertake indepth studies, analyses, and reviews of specific topics, and to identify emerging issues regarding the state of the marine environment. WMO is one of the GESAMP sponsors.

Although the early work of Working Group 38 did consider some aspects of the deposition and impacts of atmospheric nitrogen species on the ocean, it was recognized that this was a significant and complex scientific issue that required a more in depth study.  Thus, at GESAMP’s 39th session in 2012, Members approved additional terms of reference for continued work of GESAMP WG 38 to address issues related to the impact of the atmospheric deposition of anthropogenic nitrogen to the ocean. An abbreviated form of the new Terms of Reference were as follows:

•          Update the geographical estimates of atmospheric anthropogenic nitrogen deposition to the global ocean;

•          Re-evaluate the magnitude and impact of atmospheric nitrogen deposition on marine biogeochemistry;

•          Provide a more reliable estimate of the impact of atmospheric anthropogenic nitrogen deposition on the production of additional nitrous oxide in the ocean and its subsequent emission to the atmosphere;

•          Evaluate the extent to which anthropogenic nitrogen, delivered to the coastal zone via rivers, is transported to the open ocean; and

•          Make a detailed estimate of the input and impact of anthropogenic nitrogen in the area of the Northern Indian Ocean and the South China Sea.

To address these new terms of reference, a highly successful and productive workshop on “The Atmospheric Deposition of Nitrogen and Its Impact on Marine Biogeochemistry” was held at the University of East Anglia in Norwich, United Kingdom, from 11 to 14 February 2013. Twenty-three scientists participated in the workshop. Sub-groups began the development of a number of scientific papers covering the task areas above. Six of these papers have been published in the peer-reviewed scientific literature and a seventh paper will be submitted in the latter part of 2017 (these are listed at the end of this section). This nitrogen workshop was supported by WMO, IMO, the University of East Anglia and the US National Science Foundation through SCOR.

From 27 February to March 2, 2017 two workshops took place at the University of East Anglia (UEA), Norwich, United Kingdom under the auspices of GESAMP Working Group 38 and sponsored by WMO, NSF, SCOR, SOLAS and UEA. These workshops focused on the changes in the acid/base balance of the atmosphere and ocean, and their impacts on air-sea exchange. 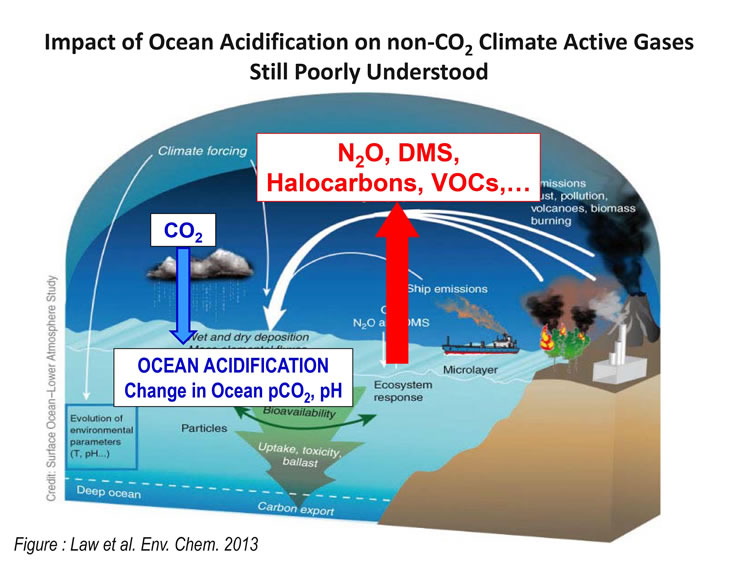 Earlier investigations on the impact of ocean acidification (OA) have primarily focused on changes in oceanic uptake of anthropogenic CO2, the resulting shifts in carbonate chemical equilibria and the consequences for marine calcifying organisms. Little attention has been paid to the direct impacts of OA on the ocean sources of a range of other gaseous and aerosol species (including N2O, CH4, DMS, and marine VOCs and halocarbons) that are influential in regulating radiative forcing, atmospheric oxidising capacity (via OH and O3 cycling) and atmospheric chemistry. The oceanic processes governing emissions of these species are frequently sensitive to the changes in pH and ocean pCO2 accompanying ocean acidification. The direct and indirect influences of these oceanic processes (e.g., microbial metabolic rates, levels of surface primary production, ecosystem composition, etc.) on ocean fluxes of non-CO2 trace gases and aerosols, and the subsequent feedbacks to climate remain highly uncertain. The goal of this workshop was to review and synthesize the current science on the direct impact of OA on marine emissions of these other key species; identify the primary needs for new research to improve understanding of these processes and quantify the impact of OA on marine fluxes; publish the results in the open peer-reviewed scientific literature, and provide input to national and international research programs and relevant WMO programmes. 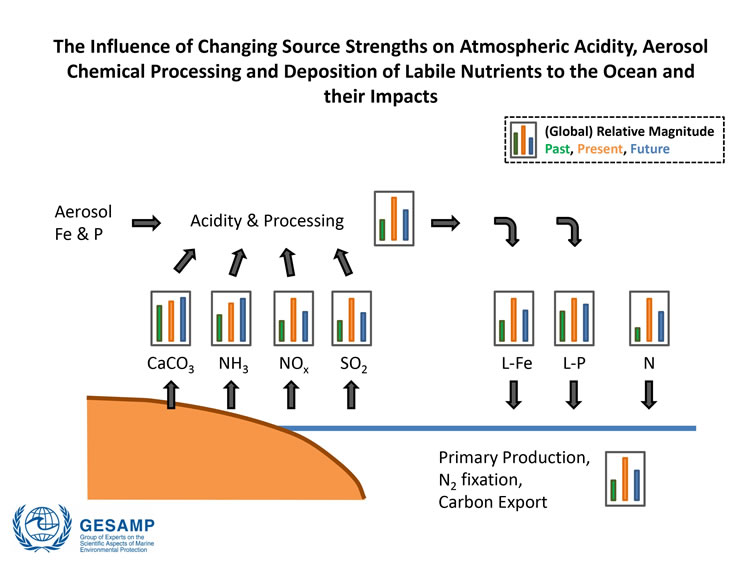 Atmospheric deposition of nutrients to the ocean is known to play a significant role in regulating marine productivity and biogeochemistry, in turn potentially impacting the drawdown of CO2 from surface seawater as well as the production of other climate-active gases (e.g., N2O and DMS). The specific impact is dependent on the nutrient in question, the location of the deposition (more significant impact where a particular nutrient is in short supply), and the bioavailability of the deposited nutrient. Bioavailability is largely governed by the chemical speciation of a nutrient and, in general, insoluble species are not bioavailable. For Fe and P, solubility increases during transport through the atmosphere. The causes of this increase are complex, but interactions of aerosol particles with acids appear to play a significant role. Past and future changes in anthropogenic emissions of acidic (SO2 and NOx) and alkaline (NH3) gases have had and likely will have an impact on the acidity of the atmosphere downwind of major urban/industrial sources, with potential consequences to the supply of soluble nutrients to the ocean. Concurrent with this change in acidity there are likely to be other changes which may also impact marine productivity rates and microbial species population composition. The goal of this workshop was to review and synthesize the current scientific information on solubility of key biogeochemical elements, their pH sensitivity and the biogeochemical controls on the pH sensitivity; identify the key future research needs that are necessary to reduce uncertainties in predictive capability in this area; publish the results in the open peer-reviewed scientific literature; and interact with and provide information to leading relevant international groups (e.g., SOLAS, IGAC, IMBER, SCOR) and WMO programmes such as GAW.