Sea surface temperatures in the tropical Pacific have generally been at borderline to weak El Niño levels since October 2018. However, it was not until February that some atmospheric indicators reacted to these warmer than average sea surface temperatures. WMO Global Producing Centers of Long Range Forecasts predict ocean temperatures to remain close to current levels through the June-August period, but may ease in September-November. Given current conditions and model outlooks, the chance of El Niño during June-August 2019 is estimated at 60-65%, decreasing to 50% from September 2019 onwards. The chance for a strong El Niño during 2019 appears low. National Meteorological and Hydrological Services will continue to closely monitor changes in the state of ENSO over the coming months.

About two-thirds of the models from the WMO Global Producing Centers of Long Range Forecasts predict ocean temperature patterns to continue at borderline or weak El Niño levels through the June-August period, and over half of them predict continuation through September-November. Model predictions of the strength of the El Niño, as characterized by the departures from normal of sea surface temperatures in the east-central tropical Pacific, range from approximately 0.5 to 0.9 degrees Celsius above average during June-August. Based on the model predictions and expert assessment, the probability of El Niño conditions being maintained is estimated to be about 60-65% through at least June-August, and about 50% for September-November 2019. However, outlooks made at this time of the year are uncertain beyond July or August and should be considered with caution. Even if ocean conditions do remain at El Niño levels for the next several months, the chance for a strong event (sea surface temperatures in the east-central tropical Pacific rising to at least 1.5 degrees Celsius above average) during this period is low.

It is important to note that El Niño and La Niña are not the only factors that drive global climate patterns, and that the strength of El Niño/Southern Oscillation (ENSO) does not automatically correspond to the strength of its effects. At the regional level, seasonal outlooks need to assess the relative effects of both the ENSO state and other locally relevant climate drivers. For example, sea surface temperatures over the Indian Ocean, the southeastern Pacific Ocean and the Tropical Atlantic Ocean are also known to influence the climate in the adjacent land areas. Regionally and locally applicable information is available via regional and national seasonal climate outlooks, such as those produced by WMO Regional Climate Centres (RCCs), Regional Climate Outlook Forums (RCOFs) and National Meteorological and Hydrological Services (NMHSs). 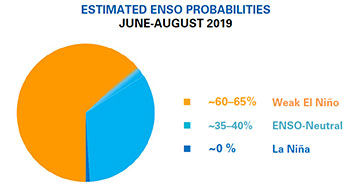 The state of ENSO will continue to be carefully monitored. More detailed interpretations of regional climate variability will be generated routinely by the climate forecasting community over the coming months and will be made available through National Meteorological and Hydrological Services.

An archive of all WMO El Niño/La Niña Updates issued so far, including this one, is available at: