The WMO Severe Weather Forecasting programme (SWFP) was started as a Severe Weather Forecasting Demonstration Project (SWFDP) in 2006. Since its inception, it has been successfully strengthening capacity of the National Meteorological and Hydrological Services (NMHSs) in developing countries including least developed countries (LDCs) and Small Island Developing States (SIDS) to deliver improved forecasts and warnings of severe weather to save lives and livelihoods, and protect property and infrastructure. Since 2016, the project in collaboration with WMO Public Weather Services Programme, is also focusing on developing capacity of the participating countries on impact-based forecasts and warnings to improve warning products and services for improved decision-making. i.e. to deliver potential effects of forecast weather on users and stakeholders. The Eighteenth World Meteorological Congress (Cg-18, June 2019) through its Resolution 15 (Cg-18) decided to remove the 'demonstration' designation of SWFDP to refer it as Severe Weather Forecasting programme (SWFP) in consideration of the fact that Project has demonstrated the capability of the cascading forecasting process.

The first SWFDP regional subproject was started in south-eastern Africa in 2006 with involvement of just 5 countries (Botswana, Madagascar, Mozambique, United Republic of Tanzania & Zimbabwe) and with contributions from RSMC Pretoria (South Africa) to provide regional severe weather forecast guidance products and RSMC La Réunion (France) for tropical cyclone forecast support. The global centres of ECMWF, UK Met Office and US NOAA/NCEP contributed for NWP including EPS products, while EUMETSAT contributed for satellite information.  In 2008, this first subproject was expanded to all 16 countries in Southern Africa. In later years, the project was rolled out to several other sub-regions in the world. 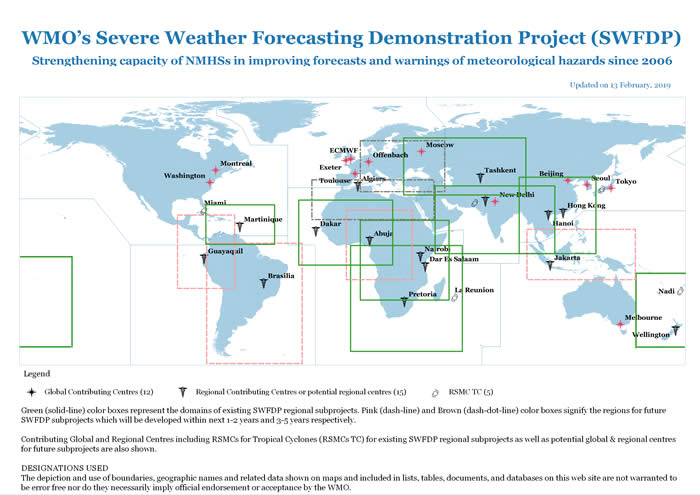 The SWFP has proven to improve the lead-time and reliability for alerts and warnings about high-impact events such as heavy precipitation, strong winds and high waves. It has been strengthening engagement of NMHSs with users including media, disaster management and civil protection agencies and local communities for improved disaster risk reduction (DRR) and decision making process by users. The project is benefiting to various socio-economic sectors as well, including agriculture, fisheries, aviation, and marine transportation.

SWFP has been making contributions to the WMO Strategic Priorities for 2016-2019, especially in areas of DRR, GFCS (through climate change adaptation by building climate resilience) and Capacity Development. Through these contributions and owing to its potential operational support to Multi-Hazard Early Warning Systems (MHEWS) at regional and national levels, the SWFP aims to support the UN 2030 Agenda for Sustainable Development (Sustainable Development Goals) and the Sendai Framework for DRR 2015-2030.

Countries participating in the project are able to benefit from advances in the science of weather forecasting, especially the dramatic development in Numerical Weather Prediction (NWP) including Ensemble Prediction Systems (EPS) which give guidance to weather forecasters in advance of potential hazardous weather conditions for issuance of alerts and warnings.