Coastal inundation occurs along vulnerable coastlines. The combination of storm surges – typically from tropical cyclones or extratropical storms – and waves, with riverine flooding at various tidal states regularly leads to major loss of life. Yet, most countries with vulnerable coastlines are experiencing increases in human settlement and levels of development for fishing, tourism and other infrastructure in coastal areas, leaving more people at risk. This has led to even greater concern for coastal flooding and inundation.

This points to the need for coastal inundation early warning systems that adequately reflect the various hazards and their interactions.

The Coastal Inundation Forecasting Demonstration Project (CIFDP) was initiated by WMO in 2009 to provide an example of cooperative work as a strategy for building improved operational forecast and warning capability for coastal inundation from combined extreme waves, surges and river flooding events, that can be sustained by the responsible national agencies.

Details of the CIFDP is here.

Following independent reviews of the CIFDP, as well as the Flood Forecast Guidance System (FFGS) and Severe Weather Forecast Demonstration Project (SWFDP), and of the consolidated approach to ensure CIFDP, FFGS and SWFDP provide efficient, sustainable services – the 18th World Meteorological Congress, through Resolutions 15 and 29, decided to remove the “demonstration” tag from the project and endorsed the Coastal Inundation Forecasting Initiative (CIFI) to ensure the continued development of CIFI, FFGS and SWFP as individual initiatives within the context of an MHEWS environment with integrated coastal, flooding and severe weather capabilities for the WMO, and to support the implementation of the three individual initiatives (CIFI, FFGS and SWFP) for the benefit of Members.

To this end, a Guide to Implementation of a Coastal Inundation Forecasting - Early Warning System (CIF-EWS) is being developed to provide an incremental development that can also be integrated into a full MHEWS if necessary, to enable at-risk countries and/or regions to undertake a “step by step” process in establishing a CIF-EWS.  This is especially important for Small Island Developing States (SIDS) and Least Developed Countries (LDCs) with vulnerable coastlines.  This Guide is based on the successful implementation of the four demonstration systems over the past decade through the CIFDP.

The Guide will emphasise best practice through the development of a Project Development Plan, accessing international experts to assist, and initiating in-country governance arrangements suitable for implementation of the CIF-EWS.  Because each country implementing such a system will have its own unique set of coastal inundation hazards, the Guide will provide a flexible approach to a “system-build” based on well-established risk analyses.  Additionally, reference is made where appropriate to Quality Management Systems and other WMO standards such as instrumentation and networks.  The Guide will also include a comprehensive explanation of the hazards and the models used for their forecasting and warning, along with appropriate reference material.

For Members considering establishing a CIF-EWS, external sponsorship can come from a number of international organizations or initiatives. WMO supports and facilitates various mutually-beneficial public-private engagements to optimize service delivery, and adding value to society. Multi-hazard early warning systems such as this CIF-EWS, are part of WMO’s emerging services.  As an example, Congress 18 (2019) in Resolution 74 highlighted such initiatives.

Dangerous trends in coastal population vulnerability are more visible in SIDS because of their small geographical area, isolation and exposure; as around one-third of their population is living on land that is less than five meters above sea level(UNDP, 2010; UNDP, 2017).

CIF-EWS should predict the above coastal hazards and be capable of interacting with other EWS for specific hazards (e.g. severe weather) through modelling, forecasting and dissemination). In this regard, CIF-EWS acts a component of an E2E Multi-Hazard Early Warning System (MHEWS) providing severe weather, marine and hydrological services.

The E2E nature of a CIF-EWS should be in line with the definition contained in “MHEWS: A Checklist”, according to which it is described as a capability to: provide risk knowledge; monitor coastal inundation hazards; model events; issue forecasts and warnings; as well as to disseminate and communicate warning information to National Disaster Management Organizations (NDMO) and the community. This is undertaken in order to mitigate possible adverse consequences of coastal inundation, and improving national preparedness and response capabilities.

CIF-EWS should be capable of dealing with natural phenomena which are responsible for flooding in coastal areas, as listed above. While tsunami warnings are very specific due to their geophysical nature, they are typically covered by their own EWS operated usually by the NMHS (but not always) under the UNESCO/IOC intergovernmental arrangements. The IOC has well established cascading systems similar to WMO’s atmospheric and ocean models.  The IOC works in close cooperation with WMO on ocean and communication networks and their designated specialist countries (“Tsunami Service Providers”, similar to WMO Regional Specialized Meteorological Centres) in each ocean provide advisories of potential tsunamis for other countries to issue warning services. These should be incorporated in the CIF-EWS outputs, especially in the ‘last mile’. While dealing with marine and hydrometeorological hazards’ modelling for coastal inundation, it is necessary to model each hazard responsible for coastal flooding so that individual impacts can be determined individually as well as in combination.

Forecasting of ocean and marine hazards is approached via application of 3-D hydrodynamic ocean models, capable of simulating and forecasting storm surges and tidal effect. Examples of ocean models, which can be applied within the CIF-EWS, can be found in the CIFDP sub-projects’ reports (JCOMM, 2017; JCOMM, 2018; JCOMM, 2019a and JCOMM, 2019b).

Inland river floods which affect coastal flooding are typically riverine floods, for which the flood wave can interact with ocean waves/storm surge and tidal effects. This occurs when the river water “hits” the elevated water level at the coast, creating a “natural dam”. Such interaction results in complex processes in the estuarine area, including a backwater effect which can exacerbate coastal inundation. For small river basins, flood formation and travel time from upper catchments to the river mouth tends to be short and therefore mandates the requirement to model not only riverine flooding on a major river(s) that approach(es) the coastal zone, but also rainfall-runoff processes in the upper catchment of a river. 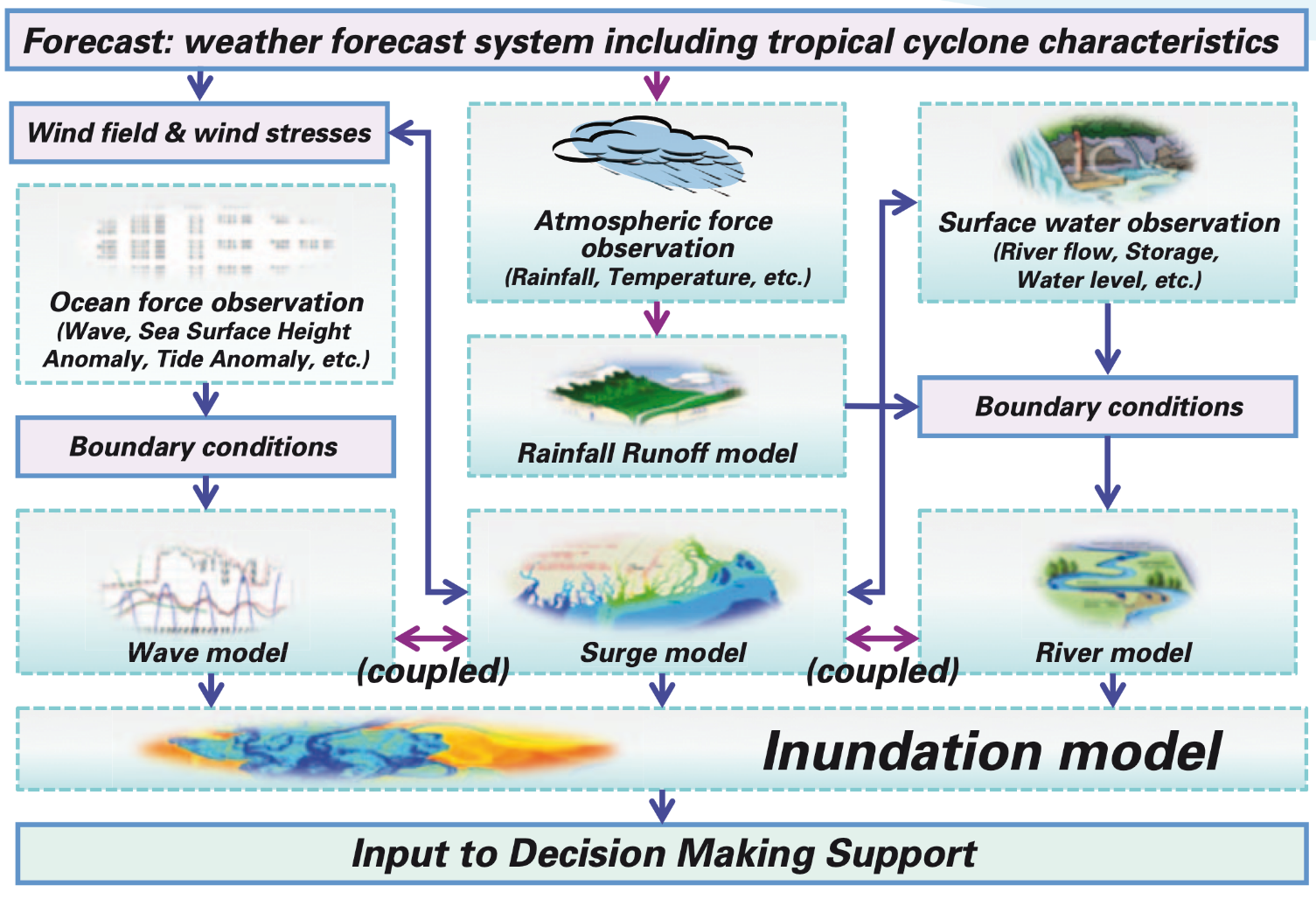 Diagram of the CIF-EWS main modelling components (WMO, 2013a)

The need to model rainfall-runoff processes is especially vital for SIDS, where upper small river catchments typically experience intense rainfalls from tropical storms. These can generate fast-developing flash floods with short formation and travel time to main rivers, and which rapidly flow in a seaward direction. Thus, modelling of both flash floods and riverine floods are critical for SIDS where tropical systems can bring heavy rainfalls to the river catchments, located near the coastal areas; or for other countries with a short travel time from upper catchments to a river’s coastal area.

Special attention in coastal inundation modelling and forecasting is given to the estuarine zone, where the “bridge” between the ocean and river processes must be modelled in order to achieve accurate coastal inundation. Rainfall-runoff and river routing models are used to model streamflow generation in upstream catchments and then route it downstream to the coastal area in order to couple with the sea/ocean model. Models of different complexity are used in operational practices (e.g., WMO,2009; WMO,2011)

The SWFP provides support to many countries and regions for weather forecasting for the ocean and hydrological model forcing and ocean models that have been implemented through CIFDP. In terms of inland hydrological flooding, there are WMO Interoperable Platforms and Models for Advancing Flood Forecasting and the widely implemented FFGS as input for fast-developing flash floods in upper catchments.

The atmosphere, ocean and river modelling chain for coastal inundation

Tsunami Coastal Inundation as an Input to CIF-EWS

Many countries with vulnerable coastal communities also have tsunami warning systems that are trialed and tested regularly due to the major loss of life that has occurred, in particular after the tragic 2004 Indian Ocean tsunami. The UNESCO Intergovernmental Oceanographic Commission (IOC) worked with WMO in the immediate period after this tragedy, and the IOC has taken responsibility through regional Intergovernmental Coordination Groups (ICGs) to coordinate the continued development and sustainability of the tsunami warning systems. IOC has been playing the major role in these systems and coordinates effective ocean-wide testing and improvements on a regular basis. There are opportunities to leverage the successful international tsunami efforts in collaboration with the CIF-EWS; especially for community warning and the “last mile”.

Therefore, during the planning for the new CIF-EWS, it will be important for countries to incorporate this hazard into the end-to-end system The approach will be similar to the WMO cascading system of products where Regional Specialist Centres provide input to the country’s NMHS. For tsunami warnings, this role will be provided by Tsunami Advisory Centres under the auspices of the UNESCO IOC/ICGs for the relevant ocean or sea. For example, in the Indian Ocean, three countries provide this advisory service: Australia, India and Indonesia. Advances in tsunami warnings to enhance community responses were highlighted at the IOC/UNESCO international symposium held in February 2018 in Paris (IOC/UNESCO,2018)

Coastal inundations are an increasing threat to the lives and livelihoods of people living in low-lying, highly-populated coastal areas. According to the World Bank Report 2005, at least 2.6 million people have drowned in coastal inundation, particularly caused by storm surges, over the last 200 years.

The purpose of the WMO Coastal Inundation Forecasting Initiative (CIFI) is to meet challenges of coastal communities’ safety and to support sustainable development through enhancing coastal inundation forecasting and warning systems at the regional scale.

Benefit for CIF-EWS for implementing countries:

Upon completion of national and/or regional implementation of CIF-EWS, countries will implement an operational system for integrated coastal inundation forecasting and warning, providing objective basis for coastal disaster (flooding) management; contributing to saving lives, reducing loss of livelihood and property, and enhancing resilience and sustainability in coastal communities.

Upon completion of a CIF-EWS, countries will be provided with valuable input to the assessment and awareness of the issues of coastal inundation management within its governments. It would also assist the countries to advance steps toward integrated forecasting and warning services.

A national and/or regional project CIF-EWS is generally implemented by either national resources or external funding support from donor agencies. The National Coordination Team (NCT), led by national operational agencies for coastal inundation forecasting, would be responsible for the implementation of the CIF-EWS) system. The NCT works with the CIF-EWS Steering Group (PSG) and advice from WMO (where necessary) to identify financial and in-kind resources required for the project’s full implementation over all phases. A project Development Plan should be prepared and followed throughout implementation.

Upon the completion of a national project, operation and maintenance of the CIF-EWS system would be the responsibility of national operational agencies with mandate of coastal inundation (marine and flood) warnings.

The main focus of the CIF-EWS will be to facilitate the development of efficient forecasting and warning systems for coastal inundation based on robust science and observations: