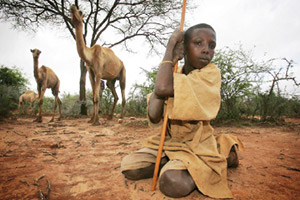 Drought is widely recognized as a slow creeping natural hazard that occurs as a consequence of the natural climatic variability. In recent years, concern has grown world-wide that droughts may be increasing in frequency and severity given the changing climatic conditions. Responses to droughts in most parts of the world are generally reactive in terms of crisis management and are known to be untimely, poorly coordinated and disintegrated. Consequently, the economic, social and environmental impacts of droughts have increased significantly worldwide. Because of their long-term socio-economic impacts, droughts are by far the most damaging of all natural disasters.

The context of current droughts calls for pro-active future actions to be able to cope with their associated imperatives. Despite the repeated occurrences of droughts throughout human history and their large impacts on different socio-economic sectors, no concerted efforts have ever been made to initiate a dialogue on the formulation and adoption of national drought policies. Without a coordinated, national drought policy that includes effective monitoring and early warning systems to deliver timely information to decision makers, effective impact assessment procedures, pro-active risk management measures, preparedness plans aimed at increasing the coping capacity, and effective emergency response programmes directed at reducing the impacts of drought, nations will continue to respond to drought in a reactive, crisis management mode. To provide this preventive support mechanism to drought-affected societies, the World Meteorological Organization (WMO) launched the Integrated Drought Management Programme (IDMP).

Moreover, in order to address the issue of national drought policy, WMO Congress at its Sixteenth Session held in Geneva in 2011 recommended the organization of a “High-level Meeting on National Drought Policy (HMNDP).” Accordingly, WMO, the Secretariat of the United Nations Convention to Combat Desertification (UNCCD) and the Food and Agriculture Organization of the United Nations (FAO), in collaboration with a number of UN agencies, international and regional organizations and key national agencies, plan to organize the HMNDP in Geneva in March 2013.

In the framework of IDMP activities, the HMNDP will provide practical insight into useful, science-based actions to address the key drought issues being considered by governments and the private sector under the UNCCD and the various strategies to cope with drought. National governments must adopt policies that engender cooperation and coordination at all levels of government in order to increase their capacity to cope with extended periods of water scarcity in the event of a drought. The ultimate goal is to create more drought-resilient societies.

GOALS OF THE NATIONAL DROUGHT POLICIES

SOME USEFUL INFORMATION ON NATIONAL DROUGHT POLICY CAN BE FOUND IN: