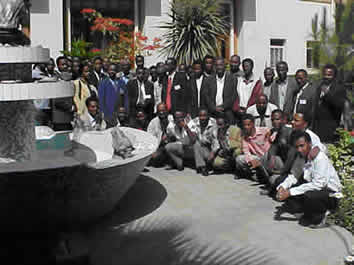 The Agrometeorological Roving Seminar on the Application of Agro-Meteorology for increasing agricultural production was held from 16 to 17 May 2007 in Mekelle, Ethiopia.

In addition, it has been possible to share the successful experience and major lessons of the Mali agrometeorological pilot project with support of WMO and NMA, including sessions with the participants on how agro-meteorological service can directly reach farmers.

(i) Agro-Meteorological Extension service in Mali

(iv) The role of communication and Media in agro-meteorology extension service.

The presentations focused on the involvement of the farmers in the measuring rainfall on their plots of land to aid them in decision-making regarding when to sow their crops, when to apply fertilizers, and also for the implementation of rain water harvesting. There was a lively discussion on how to make practical use of the Mali experience in Ethiopia. The uncertainty regarding the time of sowing was noted as one major problem facing the farmer over moisture deficient areas of Ethiopia. Lessons learned included: teamwork and good coordination between multi-disciplinary workers who give advice to farmers and good cooperation of the mass media. Training presentations given by the NMA staff included:

i) Meteorological Forecast and Interpretation for agricultural activities;

ii) Demonstration on how to use NMA’s Web-site to get different types of real time agro-meteorological data (as the web-site is updated every day);

During the second day of the seminar the native Ethiopian Amharic language was used instead of English so that the participants could express their views freely. Participant recommendations were given in Amharic and these have been summarized into the following points:

ii) There should be an improvement of forecasts that can be applicable directly to the local conditions, instead of being based on large areas;

iii) Stronger team work and coordination is needed between meteorologists, agriculture personnel, and the media for the strengthening of agro-meteorological extension service to farmers;

iv) There must be a system where real time data at meteorological stations can be available locally to the farmers, as requested;

v) Agro-meteorological bulletins which are being distributed by the NMA and the meteorological branch offices should be accessible in terms of the language of communication and made easily interpreted so that they can directly reach the farmers;

vii) The mass media must give more attention to the dissemination of agro-meteorological advisories and information to farmers.